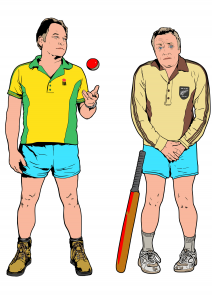 It’s a work day but Colin has pulled a sickie. Not an uncommon tactic for him when the New Zealand cricket team is playing Australia at the Basin Reserve. But today’s no ordinary test – long lost brother Don is turning up and Colin’s crisp Beige Brigade uniform is about to get dirty.

When the tardy Don does show, bursting in his Aussie green and gold, and with an esky full of beer, the expected tension is assuaged by his inebriation and he immediately gets to work denigrating everything Colin holds dear about New Zealand.

When play is delayed, Colin and Don’s attentions turn towards that famous day in 1981 when Greg Chappell ordered his younger brother Trevor to bowl underarm in the last ball of a one-dayer that re- quired six runs from the Kiwis. Rallying the crowd and appointing a judge, Don makes the case for Greg Chappell and the Aussie team of the time who were so exhausted from Kerry Packer’s new professionalgame that beating the Kiwis would at least ensure a day off. A less crowd-confident Colin can’t bear his brother’s excuses and pleads with the ‘jury’ to see sense and find Chappell guilty of being ‘the worstcheat in the history of sport’.

Mimicking a gallery of characters including Don Bradman, David Boon and Rod Marsh, Don and Colin toss the argument back and forth, equally intent on proving their case. Soon though the events of the time move closer to home and Colin and Don re-enact the events leading up to the family attending that fateful game in Melbourne, where the two played cricket on the sidelines during play. And Colin makes the painful admission that as a teen his promising cricket career was stymied by an errant bowl that cost him a testicle, an appendage he insists was surely weakened by Don’s bodyline bowling as a youngster. But when Don laughs this off, Colin reveals why he’s really asked his brother over to Wellington: their mother is gravely ill, and desperate to finally meet her grandchildren. But Don’s only just getting started,citing the fact Mum hadn’t even sent a card when their father passed away.

In an attempt to deviate from the awkwardness, Don produces a joint. It works. A stoned Colin againfires up his attack on the beleaguered Chappell brothers. Playing Richie Benaud, Richard Hadlee, theChappell brothers, Brian MacKechnie and others, the two then re-enact the play leading up to that mo- mentous moment when Trevor Chappell bowled the underarm.

But Don’s attempt to prevaricate only serves to raise the question of who was at fault for the fight that subsequently broke out between their parents and led their mother to drag Colin off to Wellington andaway from his older brother for good. The debate, and their drinking, cranks up a notch as Don defends his dad, and Colin steadfastly goes on the attack. And unknowingly breaks him.

Don admits that his unkempt state is a result of roughing it after his wife threw him out a few weeks be-fore: he hardly sees the kids himself. Colin is sympathetic, but too advanced to be arrested by what he sees as more of Don’s continuous tactics. So Don, pissed in every respect, storms off to the bottle store. When Colin screams ‘MONSTER!’ over the fence, Don re-enters, vehemently on the attack. He picks up a cricket bat and lunges at Colin, narrowly missing him, and the two of them engage in a violent fightthat sees the police eject them from the ground.

Outside, the two come to their senses and devise a semi-cunning plan to get back into the ground:swapping uniforms and jumping the fence. Colin, now in the Aussie green and gold, and Don in the beige uniform, leap into the ground and hide behind the grass embankment. And as luck would have it, just as play starts.

But when Don thinks he spots Greg Chappell in the crowd and races over to get his autograph, the po-lice spot the two invaders and threaten to eject them again. But this time Don’s going out in style. Tear-ing off his clothes he turns to Colin and proposes: ‘Are you with me little brother?’. Colin can’t believe he’s doing it, but he’s tearing his clothes off too. The two of them then race out in front of the crowd,making an animated naked streak across the ground together, exiting through the gates.

And sprint towards their mum’s house.