Mitchell is a musician/composer/producer and plays a multitude of instruments. After studying at the Sydney Conservatorium of Music (Bachelor of Composition) Mitchell has performed, toured and/or been Musical Director for David Campbell, Shannon Noll, Casey Donovan, Marcus Corowa, Joe Moore & Andy Clockwise. Mitchell has a long term musical partnership with his wife Mindy Kwanten. Together as Bow And Arrow they have 3 releases with national airplay on Triple J and festival sets including for Blues Fest Byron Bay and Adelaide Fringe. The pair also direct a choir For The Love in Sydney where they have performed at Belvoir St Theatre, Sydney State Theatre and were invited to travel to New Zealand for Voco Festival 2017.

Originally from Central QLD, Joel completed his Bachelor Degree in Jazz & Popular Music (Specialisation in Guitar) at CQUniversity Conservatorium, graduating in 2012. During this time, Joel performed and toured with various bands around the Whitsundays. Moving to Melbourne in 2014 to further his career, Joel currently accompanies for various corporate and charity organisations & also performs for residences in acoustic duos for seasonal events throughout VIC. Joel released his first original self-titled EP in 2017 and is currently involved in multiple original projects whilst tutoring guitar. The Sapphires is Joel’s musical theatre debut. 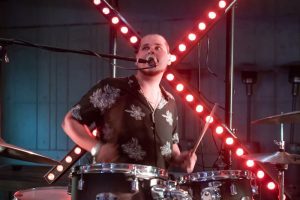 Jack is a musician based in Brisbane recognised as a drummer, guitarist and vocalist. Upon completion of his Diploma and Advanced Diploma in Performing Arts, Jack has been performing in places such as the Brisbane Festival, Here 4 Life festival (Townsville), Jazz on the green (Cairns), Cairns Indigenous Art Fair, Melbourne’s Pullman on the park (Worawa Aboriginal College Debutante Dreaming), G20 Summit Brisbane Cultural Celebrations as well as continuing regular gigs along the East Coast of Australia. The Sapphires will be jacks debut musical theatre tour.
Jack is a man of the Kamilaroi people from Quirindi, North Western New South Wales.