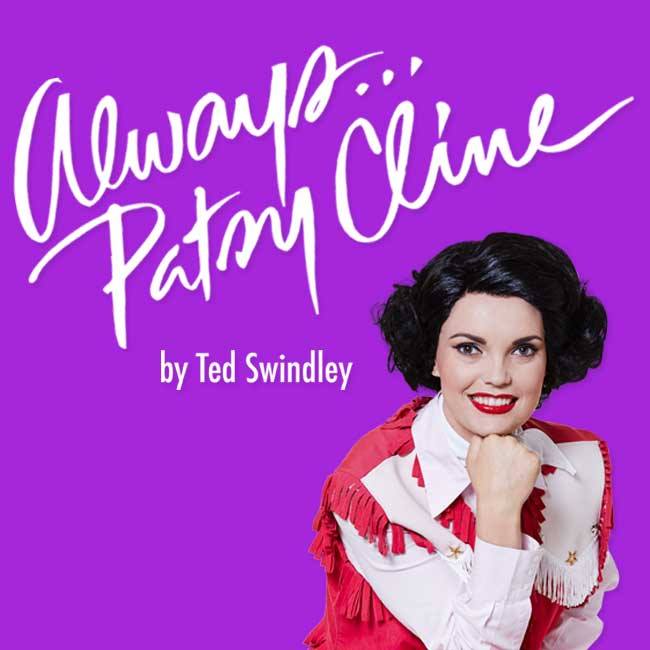 “This play reveals the inner yearnings and obsessions of the central character, Louise Seger, with great insight and most of all with gentle humour.  At the same time, it resists any temptation to parody the heart-felt emotion of a hugely popular musical form as it celebrates the artistry of a much-loved icon of the country music genre. Always.. Patsy Cline includes 27 songs.”
Denny Lawrence

Always…Patsy Cline is based on the true story of Patsy Cline’s friendship with Houston housewife Louise Seger. Having first heard Cline on the “Arthur Godfrey Show” in 1957, Seger became an immediate and avid fan of Cline’s and she constantly hounded the local disc jockey to play Cline’s records on the radio. In 1961 when Cline went to Houston for a show, Seger and her buddies arrived about an hour-and-a-half early and, by coincidence, met Cline who was travelling alone. The two women struck up a friendship that was to culminate in Cline spending the night at Seger’s house – a friendship that lasted until Cline’s untimely death in a plane crash in 1963. The relationship, which began as fan worship evolved into one of mutual respect. It is the kind of relationship that many fans would like to have with their heroes. Over a pot of strong coffee, the two women chatted about their common concerns. When Cline finally left for Dallas, her next job, the two women had exchanged addresses and telephone numbers. Seger never expected to hear from Cline again, but soon after she left, Seger received the first of many letters and phone calls from Cline. The pen-pal relationship provides much of the plot of the show. The play focuses on the fateful evening at Houston’s Esquire Ballroom when Seger hears of Cline’s death in a plane crash. Seger supplies a narrative while Courtney Conway accompanied by musicians on stage, plays Patsy Cline and sings the many songs that made her famous.

First produced in 1988 Always… Patsy Cline has enjoyed great success in its 25+ year history. It has been one of the most popular produced musicals in the States (American Theatre Magazine) and has played extensively in the US including a very successful Off Broadway season and in Nashville and Canada . The musical has had international success in the UK, Ireland and in 2001 in Australia starring Deborah Conway.

HIT Productions has had great success with musicals in the past such as their tour of Jeanie Linders’ Menopause The Musical® (2008-2012) which ran for a  phenomenal 152.5 weeks across 276 venues. We are looking forward to excellent results for our touring venues with Always… Patsy Cline and are  excited to have the opportunity to return this musical  to Australian shores 15 years on since its previous Australian production, to a nation that more than ever embraces the wonderful sound of country music.  The production will be supported by its strong brand and also powerfully leveraged from a high profile Australian country music star.

The musical combines fantastic humour, emotion and audience participation and 27 Patsy Cline’s songs including many of her unforgettable hits such as  I Fall to Pieces , Sweet Dreams, Crazy, Walkin’ After Midnight and She’s Got You. The musical offers older fans who remember Cline while she was alive a chance to reminisce while giving new fans and a whole new generation of country music lovers an idea of what seeing her was like and what she meant to her original fans. We believe that this production will be strongly supported by Australia’s large country music following offering excellent box office potential for venues.

“As anticipated, Conway is vocally strong as Patsy, nuanced in her share of the early 1960s Nashville sound; every number is rich in tone and emotional expression, and authentic in experience thanks to the live ‘Band of Bobs’ that provide musical accompaniment.”
Meredith Walker, Blue Curtains Brisbane

“For feature of its marvellous music, charming comedy and some fabulous frocks as costume, country music fans, in particular, should do-si-do themselves a favour and make sure to catch this tribute to an industry pioneer.”
Meredith Walker, Blue Curtains Brisbane

“The warmth of the polished production, starring Courtney Conway as Patsy Cline and Mandi Lodge as Louise Seger is immediate and all encompassing, but the secret must be the enduring music of Patsy Cline.”
Merlene Abbott, Stage Whispers

“As one who grew up listening to Patsy Cline on the radio in the late 50s early 60s, I can vouch for the ability of country music singer Courtney Conway, who captured the voice and tone of Cline beautifully. Audience members all had a connection, a bond to the memories of that era of music, which was satisfied by the show.”
Merlene Abbott, Stage Whispers

“Courtney Conway was WOW! An angel to look at, a dream to listen to. The simple yet gorgeous costumes captured the look and feel of the era.”
Merlene Abbott, Stage Whispers

“Courtney Conway, an experienced and talented country singer, plays the part of Patsy Cline. She takes the vocal stylings and makes them her own while invoking the beauty of Patsy Cline’s voice and performances.”
Rachel McGrath-Kerr, Stage Whispers

“Ross Sermons, the music director, and Tommy Harrison, the drummer, are on stage for the entire show as Patsy’s band. Their music makes the performance zing! Mandi Lodge also provides backing vocals for some songs.”
Rachel McGrath-Kerr, Stage Whispers

“Filled with so many wonderful songs, such as Crazy ,Walkin‘ After Midnight, Your Cheatin‘ Heart, You Belong to Me, True Love and Just a Closer Walk With Thee, this biographical musical revue overflows with memorable melodies and is simply irresistible.”
Chicago Theatre Review

“Go to see Always…Patsy Cline to hear the memorable songs and you’ll discover a heartfelt story that will lift your spirits.”
Chicago Critic

“Filled with so many wonderful songs, such as “Crazy,” “Walkin‘ After Midnight,” “Your Cheatin‘ Heart,” “You Belong to Me,” “True Love” and “Just a Closer Walk With Thee,” this biographical musical revue overflows with memorable melodies and is simply irresistible.”
Chicago Theatre Review